It has been said that no one else has the right to dictate how another person grieves. It’s also been said that people with autism grieve differently to others. This inference makes sense - realistically it’s widely known that autistic people experience, process and express emotion differently to others. This does not however mean that we feel less, many autistic people have suggested that they feel too much rather than too little and can be overwhelmed to the point of having difficulty working out how to express what we’re feeling.

As a consequence of this, we can appear to be aloof or detached. We also seem to always have the myth hanging over our heads that we don’t have empathy - which could potentially give rise to people doubting whether have the capacity to grieve or to console others experiencing grief.

Sometimes people even have the misconception that we are somehow cognitively reduced to being emotionless zombie robots (a misconception which is not helped by the media always seeming to question if every non-religiously motivated mass-murderer is autistic despite the fact that autistic people are far more likely to be the victims rather than perpetrators of violent acts).

Two years ago today I experienced my first major loss. My Nana died not long after receiving a cancer diagnosis - which was accompanied by a far longer prognosis of life expectancy than what actually eventuated.  She was admitted to hospital one evening and was gone in the early hours of the following morning. That day was the first time and only time she had ever been admitted to hospital for anything to do with illness. 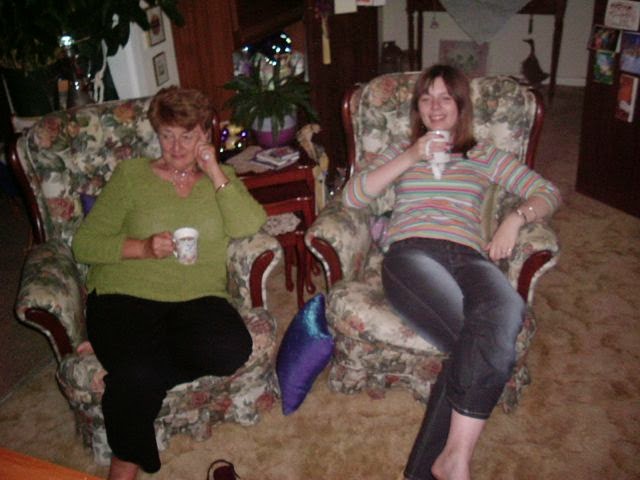 In January of 2013, about three months before my Nana’s death, I moved from Adelaide to Canberra for my first real (full time) job. If I’d known how soon after this my Nana would leave this earth I probably wouldn’t have gone, or at least would have waited one more year.  Having just started a new job I didn’t have much opportunity to come home. I also didn’t know how little time she would have left. That Easter was the last time I saw my Nana alive. The family came together and she spent most of the day in bed – chemo had left her feeling weak and perpetually exhausted. The last conversation we ever had all she wanted to speak about was how every one was enjoying themselves and asking me to go into her “present cupboard” to see if there were any chocolates to share with the family. She could barely stand but was still trying to take care of everyone else.

It wasn’t long after that trip and she was gone. I was in Canberra and the rest of the family was in Adelaide. I knew my family were feeling what I felt and trying to be there for me as much as I was trying to be there for them bur realistically I felt pretty alone. They had each other, they had shoulders to cry on and people to hug whereas I had people I’d been working with or living with for only a few months and didn’t really feel like I knew or could turn to.

My initial grief was something I dealt with on my own, not by choice but by circumstance. Today, two years on, I find myself in the same position. While grieving alone might be what you expect for someone with autism, for me at least it is something that worked out that way rather than my conscious choice. It’s true that I need some space to work through my emotions but it’s also true that for the most part I would prefer not to be alone.

In the lead up to the funeral, as I experienced those first few days of grief alone before being able to fly home, my biggest fear was that I wouldn’t be able to cry and that I would be judged as a person, and particularly as a woman, if I wasn’t able to show enough emotion. I didn’t really know what to feel, or how best to express it or what I wanted someone to do or say. One thing I did know was that it was really important to speak at the funeral. I haven’t always felt like the most equipped person to know what to do to demonstrate love, but I have always felt like I was good with words and I hoped that I would be able to show how much my Nana meant to me through speaking about it. That my words would make my love clear and paint my emotions in a way that people could see and understand.

My Nana was the person I felt closest to on this earth. If a person could feel like home, she was the person who most embodied that for me. We had always been close. I was the eldest granddaughter and realistically in a lot of ways probably the favourite (though I also feel like we each had the kind of relationship with her that my siblings and I probably all felt that way). She was the person that I looked up to, whose advice I was always grateful for and whose warmth and unconditional acceptance I always felt.

When I imagined what my wedding day would look like, she was the person I always pictured would be smiling at me and saying I looked beautiful as I was getting ready to take the step of starting a family of my own.

I found through the experience of writing and weeping over that eulogy that I didn’t have to prove what I was feeling to anyone. The way I grieved wasn’t so different to anyone else. My brother, who also has an autism diagnosis was the same. He didn’t say much but he was a rock for a lot of people that week, a quiet and unassuming source of hugs for whoever may have needed them. To me it was beautiful how everyone’s way of grieving was accepted. My brother and I grieved differently and went through a different range of displayed emotions, but that was because we are human not because we are autistic.

So where does that leave me today? A day where my loss coincides with what is probably the greatest celebration of hope, life and shared experiences on the Christian calendar. Today, I acknowledge my grief but I also choose to reflect and to be thankful. I am thankful for the seemingly endless school holidays we had spent together as I was growing up and even into adulthood. I am thankful for all the biscuits we made together and all of her childhood books I read. For how she modelled what it was to be an others-focussed person, teaching me to be generous with time and my resources and to be sensitive to and perceptive of other people’s needs.

Today, I find myself alone. My family are together, but I was not able to travel home for Easter this year. I went to Church this morning but other than that I have an empty house, leftover pizza and Christian music playing in the background for company. I am not saying I begrudge this, or that I’m not grateful. But I am saying that if I had the option I think I would have rather spent today celebrating life with others and experiencing the same kind of Joy that my aptly named Nana embodied than spending it alone. Sometimes being alone is a matter of circumstance rather than choice.

So where does that leave my ramblings? I guess what I am trying to share is that my grief is not that different and my emotions are real. That if you know someone who is a bit isolated, whether they are autistic or not, that it can mean the world to them to have someone think of them and give the option of someplace to go on the kind of days where so much emphasis is placed on celebrating with your family.

I’m not trying to make any kind of statement about faith but about humanity. We are all walking through this thing we call life. We don’t have to all do or feel things in exactly the same way but that doesn’t make us any less part of the great sea of people stretched out across this world we call home. We may not always communicate or understand each other but it’s important that people feel valued, and it can be as simply as people acknowledging that others are there and giving them the opportunity to feel connected.
Posted by Tori at 21:21 No comments: